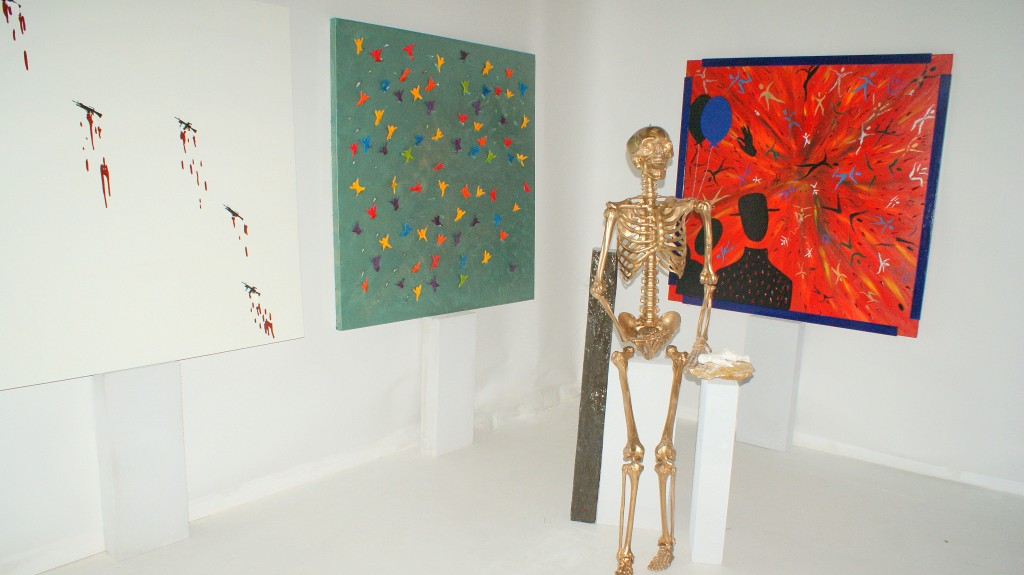 This work is pause for thought about today’s reality, yet at the same time it applies to any other moment in history.

The thought arises after a look back in time at the body of Aylan, the refugee boy who was found on the beach. This look back finds a cause, the war, represented by the work “Blood and War” in which you can see how cracks made in the canvas sprout blood under the weapons.

The second work “The Bomb” recalls the tragedy in which our society lives, shaken by terrorist attacks. It reflects how the tranquillity and innocence of a child, who walks around with his balloon, is seen cruelly destroyed by someone who has detonated a bomb, symbolised by a black hand that bursts his balloon with a pin.

Broken up bodies of mothers, children and elderly fly in the air under the astonished gaze of the child who simply set out for a stroll.

The third work “Broken Llives” shows the emptiness of all those who have been directly or indirectly affected. Figures which break the canvas, trying to make themselves visible, families with broken lives, injured, mutilated, all those who are affected but whose silent screams go unheard. Colours or order do not matter – they are all “Broken Lives”

The project ends with its conclusion  “ The Lord of the Wars”, painted in gold, always untouchable and promoting battles with one main goal: the financial one. In his hand the little Aylan, the innocent victim, “The key of awareness” who woke us up from our deliberate indifference. Indifference and inaction. Comfortable spectators of a reality which often bothers us and above which we rise, both individually and collectively.